Benjamin Elbers. A Method for Studying Difference in Segregation Levels Across Time and Space. Sociological Methods and Research.

An important topic in the study of segregation are comparisons across space and time. It has been recognized for a long time that many segregation indices are margin-dependent, which complicates such comparisons. For instance, it can be shown that the index of dissimilarity (\( D\)) is margin-dependent in terms of the units under study (e.g., neighborhoods or schools), but not in terms of the groups (e.g., racial/income groups). This led to a debate in the gender segregation literature in the 1990s, where Charles and Grusky (AJS 1995, Demography 1998) advocated the use of log-linear modeling.

Consider the following four tables, which cross-classify the number of male and female employees across the occupations A, B, and C. Table (1) shows the baseline situation. In Table (2), occupation C has grown, while in Table (3) female employment increased across all occupations. Table (4) shows an extreme example, where the integrated occupation B has grown strongly.

The indices \( D\), \( M\), and \( H\) are margin-dependent in either one or both directions, while the log-linear indices and the odds ratios stay stable. However, they also do stay stable in the extreme example, which many would regard as not very segregated.

I make use of the M index, which is margin-dependent in both directions, can be standardized (H index), and is highly decomposable:

The Solution: Decomposition of \( M\)

To decompose the difference between two \( M\) indices at times \( t_{1}\) and \( t_{2}\) into marginal and structural components, we construct two counterfactual matrices:

This allows for the following decomposition:

There are a few straightforward extensions of this decomposition:

This procedure requires six IPF procedures in total, and is based upon the elimination of the marginal contributions in all possible ways (Shapley value decomposition).

I now apply the full decomposition to the study of occupational gender segregation of the civilian population of the United States between 1990 and 2016:

The data source is the U.S. Census and the American Community Survey, downloaded from IPUMS. Harmonized occupational codings come from IPUMS. Some 50 occupations vanish over time, but no new occupations are introduced. The decomposition was carried out for the whole population, as well as for 9 major occupational groups separately. 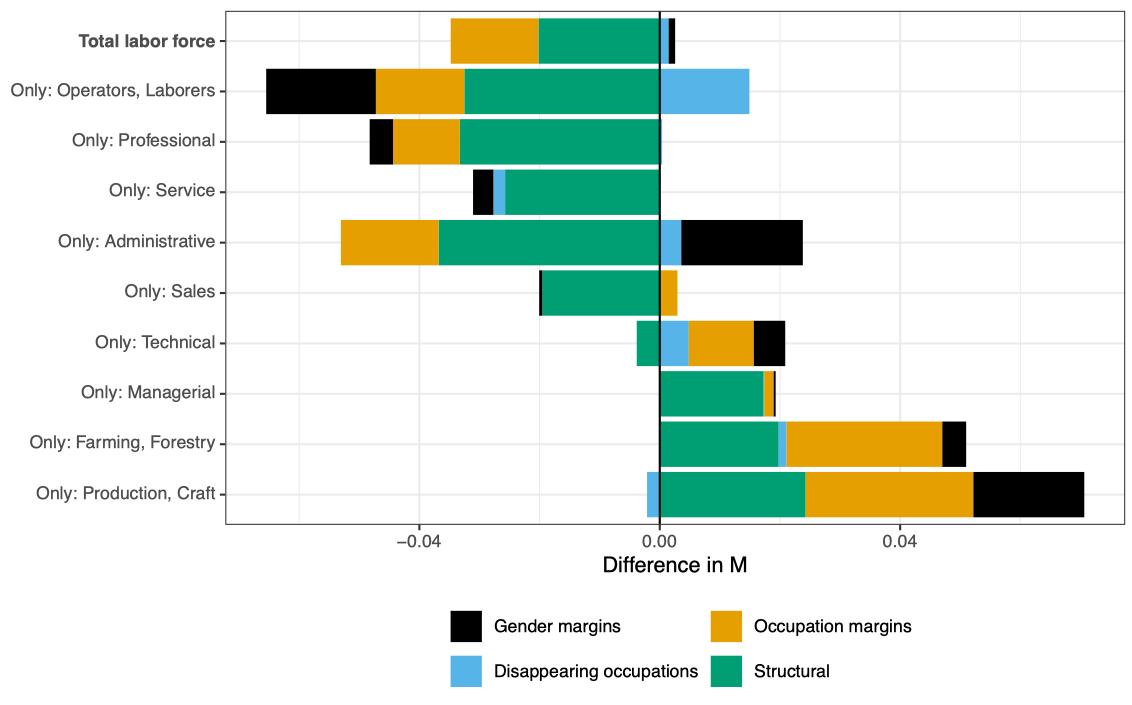 The figure shows that:

See also the R package segregation which accompanies this paper.