The disclosure of compensation peer groups is intended to provide shareholders with valuable information that can be used to scrutinize CEO compensation. Compensation consultants and watchdog organizations have established general principles for selecting peers, the most important being that peers should be companies of similar size, market capitalization, and industry profile. However, research suggests that there are substantial incentives for executives and directors to bias the compensation peer group upward to allow the CEO to extract additional rent. When companies choose compensation peer groups whose CEOs are better paid than would be the case with a neutrally chosen peer group, the focal CEO appears to be underpaid in comparison, which generates an argument for an increase in compensation for the focal CEO. A number of studies have found evidence that CEO peer groups are biased, though some have argued that what appears to be bias is actually just a reflection of the talent of the focal CEO.

We define bias as the difference in pay between the median CEO in the peer group selected by the firm and in neutral peer groups that we construct. We leverage the idea that reciprocated peer nominations are unlikely to be biased in order to construct counterfactual peer groups, which allows us to measure the bias of disclosed peer groups. Specifically, we estimate a model that predicts reciprocated peer nominations, and we use the estimates from this model to identify and select peers that are likely to nominate the focal firm as peer. Using eleven years of comprehensive data on compensation peer groups that was collected as part of this project, we demonstrate that the average firm uses an upwardly biased peer group, and that this bias cannot be accounted for by CEO talent. We also find that upward bias in compensation peer groups is highly predictive of higher CEO compensation – suggesting that there is a strong incentive for CEOs to strategically select peers. Figure 1 shows the bias as a percentage of the compensation of the median peer in a neutrally chosen peer group.

As Figure 1 shows, the size of the peer group bias has been diminishing over time since the 2006 SEC requirement that firms disclose their compensation peer groups in their corporate reports. This may be a consequence of the requirement for periodic say on pay votes on executive compensation in the 2009 Dodd-Frank Act along with the greater scrutiny of compensation practices by watchdog agencies such as Institutional Shareholder Services. However, Figure 2 shows that the predictive effect of bias on pay has gone up, which offsets the consequences of the decline in bias shown in Figure 1. 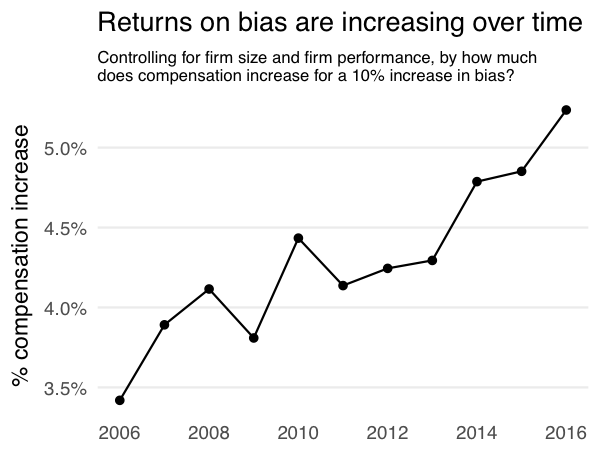 Figure 2: Returns on bias are increasing over time: Controlling for firm size and firm performance, by how much does compensation increase for a 10% increase in as?

We also demonstrate that ambiguity about the membership in a neutrally chosen peer group is being used strategically by firms to increase the size of peer group bias. When it is relatively obvious whom the firm should be choosing as peers, the bias tends to be smaller. Conversely, peer group bias is larger when firms have more discretion due to the set of plausible peers as well as the spread of the pay of their CEOs being relatively large. Figure 3 shows the median, 25th percentile and 75th percentile of peer group bias expressed as a percent of the median pay of a neutrally chosen peer group. This figure shows that bias is generally larger when firms have more discretion in the choice a peer group. 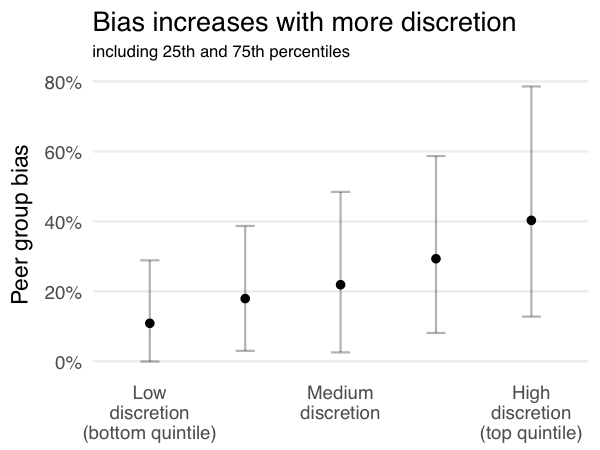 When a company is doing very well, there is arguably less need to introduce bias into the peer group because the argument for high pay can be made easily. When the company performs less well, the argument for high pay is more difficult to make. Our results show that bias is generally larger when financial targets are not met and when firms have greater discretion in the selection of peer firms from the set of plausible peers. Taken together, the findings from this research call into question the practical impact of recent efforts to introduce greater transparency into the process for determining executive compensation.